I’ve already talked about my conflicting feelings towards romance novels, which I shall not recap right now. Point is that I always know I’m being manipulated emotionally, but I can never help the warm fuzzies of reading about true love and destiny and all that. If there’s one author I’ve always wanted to hate, but somehow keep returning to because dammit his stuff just works too well, it’s Nicholas Sparks. From The Notebook to The Last Song to Dear John to The Wedding, his books are staples of the romance genre, and somehow, I never walk away with dry eyes. Message in a Bottle is no different. 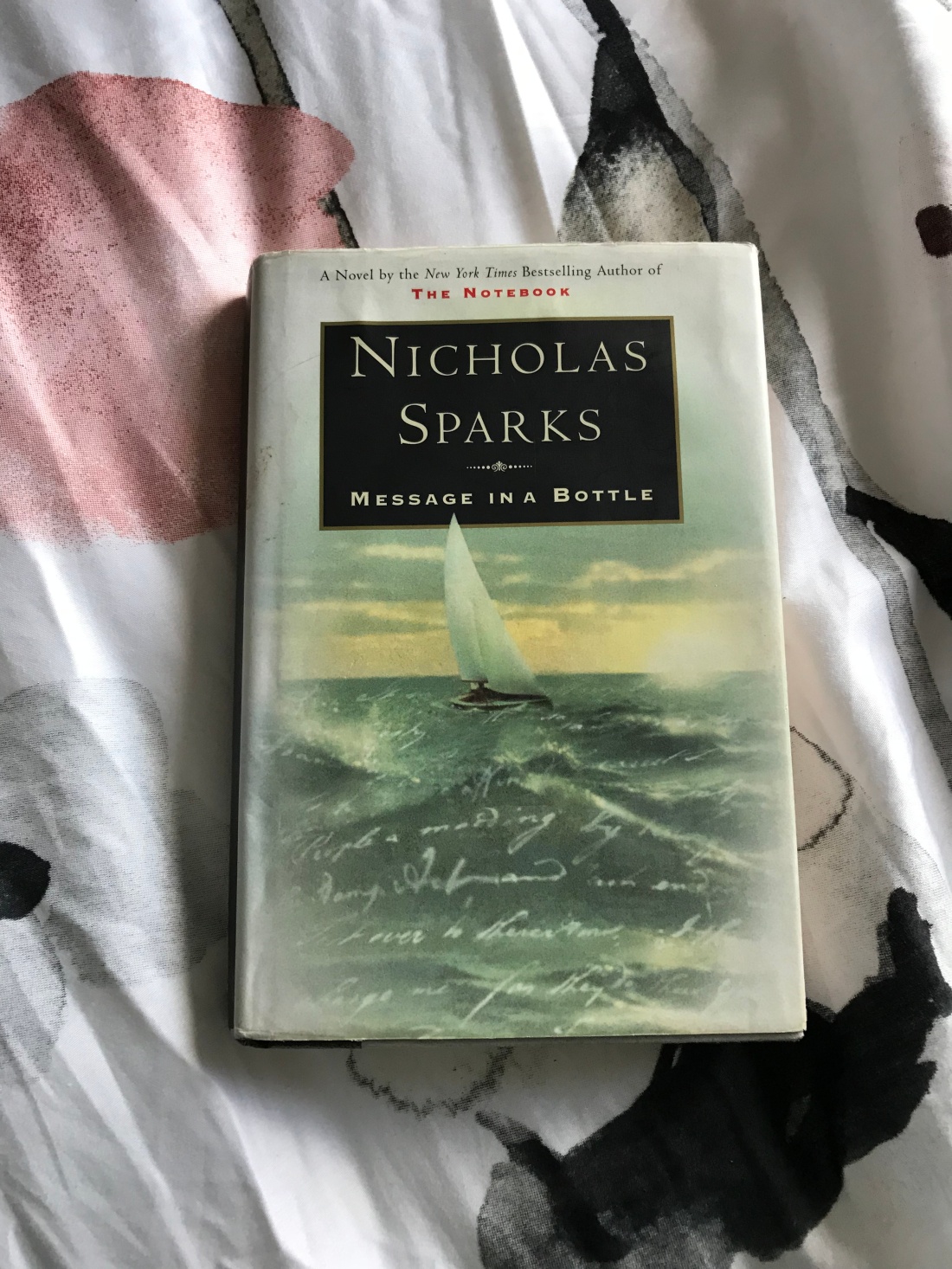 Theresa Osbourne is an up-and-coming columnist in Boston who discovers a bottle on the beach—one with a message inside. It’s a heartbroken message to a woman named Catherine from a man named Garrett. Touched by the bottle’s beautiful confession, Theresa travels from Boston to North Carolina to try to meet the man behind the words. Of course, Theresa doesn’t expect to fall in love with this lonely and sensitive man, but Garrett is still grieving for Catherine, despite his own growing feelings for Theresa. Can their love conquer grief in the end?

Maybe part of why I can work past the clichéd romantic schlock of Sparks’ works is because we take ample time to get to know our characters. Way back when I read Love Story, I complained about how we didn’t really know the characters that well and we didn’t see them grow through trials and tribulations. Sparks, on the other hand, populates his works with enough quiet moments to understand the characters as individual people. There’s a quiet sincerity to Sparks’ voice that doesn’t just revel in the schlock. At times, you’re kind of aware of the typical emotional manipulation of Sparks’ genre, but I’ll be darned if, most of the time, Sparks makes it work.

As much as I trust Sparks, I still know the formula’s in place for a dramatic falling out and an even more dramatic resolution, which either means the couple will literally kiss and make up, or someone is going to die. But again, more often than not, Sparks does it deftly enough that I really do feel for the characters and am genuinely sad when they miss that second chance or make a bad choice with tragic consequences.

Up till now, I’ve spoken very generally about Message in a Bottle, to the point where some of you might have forgotten I was speaking about that particular book. But that’s the truth to Sparks’ body of work: if you’ve read one book, there’s no real particular need to read the others, since there aren’t many different character personalities and story details kind of overlap between books. But that’s not to say that one should avoid his work, oh, no sir. His books are hard to put down and, when done right, they are a breeze to read and will draw you in very deep.

So then, what does that mean for Message in a Bottle? It certainly ranks among the better Sparks books I’ve read. It was his second published work after The Notebook, and is just as compelling and sweet. Although, it’s probably the first Sparks work whose resolution has lingered the longest after I finished the book. I love stories where tragedy occurs not because a character is terminally ill or doomed to die, but because of their choices. It speaks on a more complex level than just mourning a death we saw coming. As I write, I find myself asking the same what-if or if-only questions as the characters do, and I have a feeling this one might haunt me long into tonight.

Very much like Sarah Dessen, Nicholas Sparks is a one-trick pony. But somehow, I don’t find myself asking that he try something different (which, now that I think about it, that might have been a petty thing to say. Sarah Dessen does what she does really well; I have the freedom to read what I please, as she can write what she pleases. Sorry, Sarah). Maybe it’s because his stories are becoming more appealing the older I get, maybe I’m pulling that stick out of my butt and accepting romance novels as they are, I’m not sure. But long story short, I felt for both Garrett and Theresa, and slammed the book on my bed in a snotty mess. Not that anyone would be surprised at the Sparks formula working its magic, but still.