Yet again, I find myself reviewing a book for a writer who has done me a tremendous favor. Only more indirectly.

I subscribed to Jenna Moreci’s YouTube channel last fall, during my MFA graduate thesis. As any MFA candidate will tell you, thesis is heaven, because you have a whole school year to write your novel, but procrastination, writer’s block, and anxiety will find some way to temporarily plague your thesis experience. Watching Jenna’s content either pulled me out of an uninspired bout or gave me something to consider for my next draft. So when her second novel The Savior’s Champion was released, I thought I had procrastinated long enough on reading this long-anticipated novel. 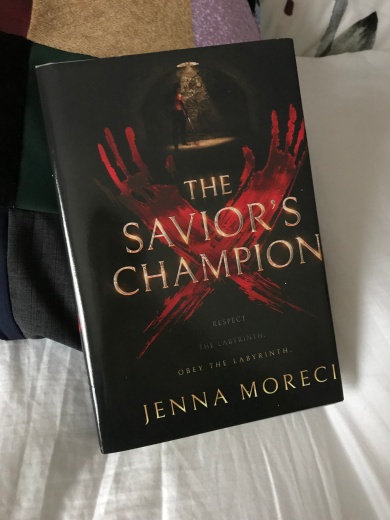 In the mythic land of Thessen, the people pay homage to their Savior; Her magic power protects from war and blight. Every generation, a Tournament is held in order to find a Sovereign to rule at Her side. But the Tournament is vicious: twenty men are chosen to compete, and only one can win the day and keep their life. One of these men, Tobias, has no wish for glory and coin: the money he gets for entering will protect his mother and crippled sister. Thus begins a treacherous adventure where Tobias must make difficult choices to not only protect his life, but a woman he falls in love with—for it is blasphemy to love anyone but the Savior when you compete for Her hand…

On paper, the story is essentially a Roman-Greco-esque Hunger Games. But the creativity and gruesomeness of each challenge in the Tournament is engaging, and the story only gets meatier with progression, as a good story ought to. Jenna successfully creates horror and suspense as you wonder not only what crazy challenge will come next, but also who is going to die next. The cast of competitors is an eclectic mix of sexist pigs and kind gentlemen, and getting to know the good ones is like getting to know a Game of Thrones character; their odds don’t look good, but some of them are just too compelling. Tobias himself is a pretty likable hero, sarcasm and nobility being his top traits. His love interest, Leila, is also a delightful little badass.

I won’t go into spoilers, but I still have to say it: the ending really spiked up this book’s final grade, because the story that the sequel will continue is one that I go crazy for. Maybe some of you saw it coming, but this is just an example of the author having all the pieces in place from the start. Plus, it gave Leila a few more points of badassery.

Now, as good as this book was, I do have to point out just two things that docked a few points. This first one is just a matter of personal taste, but “cock” and “cunt” were dropped like raindrops throughout the book, and they kind of lost their bite after a few insults. If only the most base and vile of characters used them, then their use would have been more effective. The second is that, although Tobias and Leila’s scenes were a nice reprieve from the violence and treachery, they sometimes seemed to go in circles—not terribly, just something that kind of sort of made me itch to return to the Tournament.

Jenna’s fan base has already gone crazy for this book, and I can see why. I won’t complain about the unoriginal plot because, well, of course it has been done, but I will certainly celebrate the creativity that swept me away for a well-needed respite from reality. Looking forward to the continuing adventure in “The Savior’s Sister.”