Witches, in their many incarnations, have always fascinated me. When I was thirteen, I watched the cartoon W.I.T.C.H over and over again, I wrote made-up spells in a notebook (my little sister and I even tried some—to no effect), and even composed a series of mini-stories about a seventh-grade witch’s misadventures in school. Give me a book about girls with magic powers, and you’d best believe I’ll consume it like a plate of buttery Belgian waffles. Especially when those girls are from 1915 and perform magic in an oppressive finishing school environment. 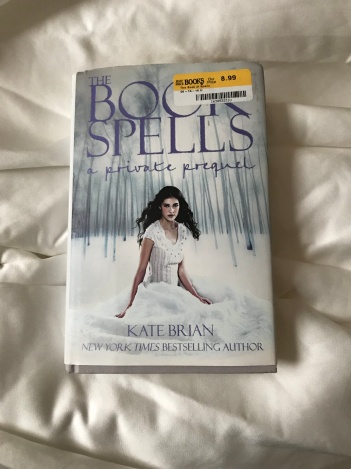 Sixteen-year-old Eliza Williams has been sent to Billings School for Girls, where she’s due to follow her older sister’s legacy by becoming a lady and snagging a husband. All she wants to do is read books and make new friends—both of which she manages to do. But when her new friends discover a trunk full of spell books deep beneath their school’s garden, they decide to form a coven. As they say, it’s all fun and games till someone loses an eye—or, in this case, till someone loses their life—and Eliza and her friends will pay a dark price for playing with magic.

I should also note that this is a prequel book to the Private series, which details the melodramatic lives of modern teenage private school students. My best friend, who has read the series many times, recommended this book to me when I wasn’t interested in the series, and if that series is her guilty pleasure, then this book is mine.

I’ve ranted before about by-the-numbers plotlines, but the boarding school formula is actually fun to read. Let’s see: a free bird girl with a controlling mother and a legacy to live up to; a forbidden romance with the queen bee’s boyfriend; a headmistress who humiliates the main character because conflict; sneaking out at night to do forbidden things, boy-related or otherwise. Maybe, unlike other by-the-number fantasies I’ve talked about, it works because we see the characters in their own lives before the conflict arises. Or maybe there is just enough going on that we can actually follow everything.

Obviously, the fun comes from the girls using magic in a tight and controlled environment. Who went through a witch phase that didn’t want a coven to practice magic with? To use a simple spell to exact mild revenge on annoying teachers or classmates? It’s pure wish fulfillment, and I’m totally fine with it, even with cheesy writing and slightly one-dimensional characters.

The coven consists of eleven girls in all, so of course not all the characters are going to be completely drawn out in three hundred pages. The book tries hardest with Eliza, the main character, but she’s a perfect picture of a modern woman. Luckily, she’s not too pious in how much she loves books or compassionately tries to include everyone, but there’s not much more to her. The second best character, though only by a margin, is Theresa, the queen bee who butts heads with Eliza over leadership of the coven, and a boy.

Yeah…part of the conflict involves Eliza getting a crush on Theresa’s fiancé, Harrison, and the two girls pulling him back and forth between them. Sure, it’s a chance for a Romeo-and-Juliet-esque balcony climb, as well as a coy ballroom dance, but romance is part and parcel to the genre, so it’s just ticking off a mark.

Like I said, the wish fulfillment of repressed teenage girls finding magic is the reason I read this book. The writing is elementary, so an eleven-year-old could easily read and enjoy it. Don’t expect anything groundbreaking or surprising, but if you’re just in a witchy mood, there’s no harm in cracking it open and playing pretend.