Skip to content
The Library Key Uncategorized May 30, 2019 7 Minutes

Every once in a while, there comes a book that I really truly marvel at. I am in a perverse rapture at the choices the writer made in creating their characters and their wondrous new world. My head hurts from trying to comprehend these choices, and I slam my hand to my cheek in sheer disbelief. I even had an ongoing conversation with my best friend as I read this book, and we gaped and laughed our faces off at the sheer madness of it.

RoseBlood is a modern retelling of Gaston Leroux’s classic The Phantom of the Opera. My best friend is the biggest Phan I know, so I gifted her this book for Christmas. She soon recommended this book to me not because it was spectacular reading, but rather because it was so…weird. And confusing. Granted, there are elements of the original Phantom that are weird and confusing, but what happens when you take all the credibility and charm out of it? Gird your loins, everyone, because you’re in for a wild ride—rant, I mean. 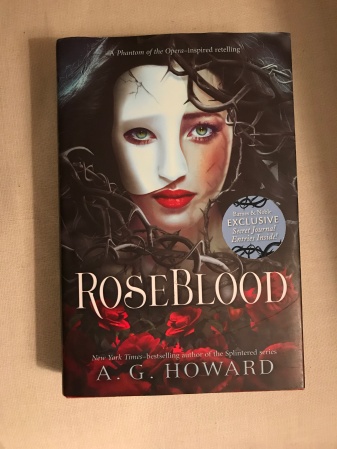 Rune Germain has an unusual gift: every time she hears opera music, she is somehow compelled to sing along. This gift leaves her drained and sick, giving her an aversion to music and to her own voice. Rune’s mother soon sends her to the mysterious music conservatory in France called RoseBlood, where Rune will try to conquer this aversion and be normal. But RoseBlood has an anonymous benefactor with a genius affinity for architecture and music, and a gardener who wears a half-mask, whose name no one knows, but somehow, Rune has seen many times in her dreams…

Something to point out is that this is not so much a retelling, as much as a continuation of Leroux’s story. The Phantom and Christine are both real here, so Rune and her friends are less like modern interpretations of Christine and Raoul and Carlotta, and more like pawns caught in a centuries-old mystery about their school’s connections to the Phantom.

Take a really good look at the original Phantom of the Opera, and it is ripe with melodrama and exaggeration. A story with a beautiful young girl caught between two men, one being a saintly and handsome childhood friend, and the other being a deformed murderer obsessed with beauty and music, is as dramatic as it gets. Add a Gothic atmosphere with an opera house’s catacombs and dark corners, and the melodramatic cheese is ripe for consumption. It’s almost the sort of thing you cannot take seriously because it is so steeped in drama and grandeur.

So when a story of a similar ilk takes itself too seriously, well…

RoseBlood tries very hard to recapture the Gothic atmosphere of the original book, but it winds up being more awkward than dramatic. For one thing, the name of the school. Would any sensible person send their child to a school with the word “blood” in the name? Second, the students have to wear uniforms, which makes sense at first glance; it is a music conservatory in France, so one must be fancy. But the black skirts, and especially the frilly white shirts, are meant to reflect nineteenth-century French fashion. And third…nearly every student at this school is American. Really? A fancy, exclusive school in France doesn’t have one single predominantly French student? After a while, you even forget that this story takes place in France, despite the occasional reference to weekend trips to Paris. It sounds like wish fulfillment to me.

But most ridiculous of all: this story takes place in the twenty-first century, and yet the school has no cell phone service. And no Internet! I thought the school was pushing an old-fashioned feel with the uniforms, but if the student population is in fact one hundred percent American, you would think they would accommodate their modern communication needs (and considering what kind of money these students might come from, they would have thrown a fit to discover they couldn’t use their smartphones and such).

So then, if the atmosphere is so messy, are the main characters any good, at least?

As I said, Rune has a special power she cannot control, and thus, she cuts herself away from people. Let’s just say, things happened with her power that she regrets, so she thinks the best course of action is to isolate herself. The only thing she’s got going for her are her dreams, in which a special and mysterious “maestro” plays music for her on a violin. For a long time, a lonely and dispirited Rune believes that this man is her long-dead father (sound familiar?) but it actually turns out to be a young man her age—a young man who wears a half-mask named Thorn.

Sounds part and parcel to the Phantom story, doesn’t it—a lonely girl with a special talent whose footsteps are haunted by a musically-gifted masked man?

Now, imagine this scenario. What if the Phantom and Christine were two parts of one soul, destined to find one another, because it is only natural for two halves to eventually rejoin. What if it turned out the two of them were not human? What if their special gifts arose from a certain magic inside of them—something that drew them to feed on other people’s life force in a twisted synergy? What if they were not human, neither man nor woman, but instead…psychic vampires?

Because that is exactly what Thorn and Rune are. They share the same gift of being drawn to sing in dulcet tones, but it comes from needing to feed on people’s life force.

It really is as stupid as it sounds.

For one thing, I think A.G. Howard used that name to make a trendy or unique twist on vampires. Which, I mean, it’s fine to try and find something new about vampires, but…after all the insanity that literary vampires have been through in the last decade, they deserve more than this. Besides, being able to take a life force doesn’t make you a vampire—rather, it makes you succubus (or incubus if you’re male). I can’t think of many succubus books off the top of my head, so this was an awesome opportunity to draw on that mythology and actually stick with it.

But nope. Because succubi are not trendy or sexy, they had to be saddled with the word “vampire” to gain some kind of traction, even though anything related to vampires these days leaves a bad taste in anyone’s mouth…

You know what else leaves a bad taste in my mouth?

Here’s the thing with this entire book: it could have had something going for it, if it didn’t put so much emphasis on Rune and Thorn’s relationship. Because Rune and Thorn are one soul joined together, there is much talk of destiny and fate, and all other melodramatic romantic stuff. And it actually would have worked a little if we actually got to see some of it.

The book is a little over 400 pages long. At least 85% percent of that is Rune and Thorn waxing romantic about each other, their dreams, and all the things they do together as oh-so-wonderful soul mates.

So, we are TOLD about their relationship, rather than SHOWN! If they really do have as deep a connection as they say—at least a thousand times each—it would help the reader to ACTUALLY SEE their time together. If they share a secret memory, LET’S SEE IT. If they share a funny inside joke, LET’S SEE IT! ONCE THEY GO FROM BEING STRANGERS TO ACTUALLY BEING ACQUAINTENCES, THEN LET’S FREAKING SEE IT!

IF THEY CARE SO, SO, SO MUCH ABOUT EACH OTHER, THEN WHY DON’T WE ACTUALLY SEE SOME OF THESE GODFORSAKEN INTERACTIONS, SO THEIR RELATIONSHIP—WHICH THE BOOK IS SO, SO DESPERATE TO PUSH—DOESN’T FEEL AS EMPTY AS A DESERT POND??

In case my enraged caps-locking didn’t say, this is the emptiest relationship I’ve read in a long, long time. They have nothing in common beyond the fact that they are two halves of one soul, which, unless destiny actually took into account whether they had any common interests or compatibility as people, is a stupid, stupid reason for any two people to be together.

I could probably end the review right here by saying the entire book is stupid, but the stupidest thing of all—the thing that nearly ruins the original Phantom story altogether—is yet to come.

What makes Leroux’s story work is that, in the middle of all the sweeping and overdramatic madness, there is a profound and intriguing human element: the Phantom himself. We cannot at all agree with the things he does, but he is a compelling character thanks not only to his incredible genius, but also to the horrors he endured that made him who he is.

Now, with all that in mind…imagine if there was another superhuman element to the Phantom. What if he managed to endure for another century after he should have died? Believe it or not, there is a third psychic vampire in this madhouse, and his name is Erik.

For the uninitiated, the Phantom and Erik are the same person.

You read it, folks. This book took one of the most enduring antiheroes of literature, and made him into an incubus.

Look, I have no problem with interpretation. Turning Pride and Prejudice into a zombie story, for example, can be interesting if you take it to extreme levels—especially if you remain aware of the absurdity of it all. But here’s the thing: the Phantom was menacing enough with his intelligence and overall demeanor. Giving him supernatural abilities kind of undermines what already made him interesting and frightening. And it’s not meant to be absurd in RoseBlood: it is meant to be taken one hundred percent seriously. According to the author’s note included with the book, this idea was spawned in an online POTO forum that A.G. Howard used for research, and I unfortunately think it should have just stayed a theory.

I really wanted to find something redeeming about this book, despite knowing I was in for a less-than-stellar ride. But the truth is that it misses the mark on everything—the setting, the characters, even its POTO allusions. The romance is atrocious, the backstory is convoluted, and it frustrates so much more than it entertains.