Junior high can be a magical time for reading. When you’re a preadolescent reading about kids becoming heroes and having grand, magical destinies, you honestly believe that anything is possible. Makes sense, considering that junior high is a heck of a confusing and awkward time. Looking back on these books, it is so easy to harp on their cheesy writing and contrived plot points, but again, these books are supposed to be uplifting and magical. One such book is featured here today. 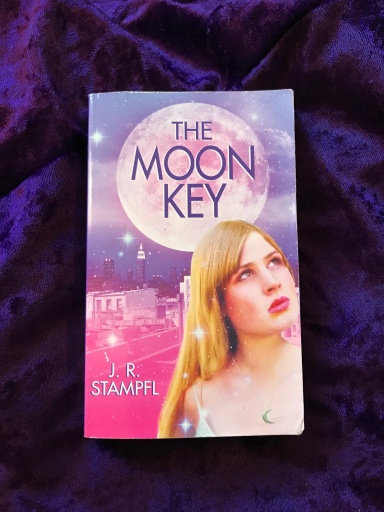 Wendy Hilton is an orphaned foster child in New York City who only wants to find her parents again. On the night of her thirteenth birthday, she receives a mysterious invitation to the Lunar Arena of Transformation, Concentration, and Hope, or LATCH for short. LATCH is a place of magic and adventure, where young teens learn to harness their inherent powers of transformation and hopefulness. Wendy will find friends, as well as enemies, in LATCH, but her greatest obstacle might just lie in the last place she expects: herself.

When you’re an awkward thirteen-year-old who just wants to feel special, this book was like a new favorite cake, and I wanted more and more of it. I’d never really read about a place like LATCH before. Because it’s not like it’s a faraway land: it’s a group of magical beings taking young teens to places like the Statue of Liberty, Yankee Stadium, and the Metropolitan Museum of Art, and doing magic-related activities. I wished I could be there alongside Wendy, going into paintings at the Met, swimming with sea lions in the Central Park Zoo, and playing around in the costume department at the Metropolitan Opera House. It’s like one giant magical tour around New York City.

But the concept of the book is more exciting than the characters that inhabit it.

Even when I was thirteen, I loved the idea of LATCH more than the people who participate in it. Wendy’s sole characteristic is that she is an orphan with a special destiny; we don’t know what she likes to do or what she is good at. I know she’s supposed to be this shy loner who grows into her own by the end, but she cannot be an entirely blank slate.

But then, there is Wendy’s nemesis, Phillip. Phillip has it in for Wendy because he believes she is connected to an accident his father had while he was in LATCH. He’s supposed to be thirteen, same as Wendy, but he talks more like a cartoonish fantasy villain. He throws around the word “destiny” so many times, and he doesn’t sound like any thirteen-year-old bully I knew. He is indeed easy to hate, but he comes very close to cartoon levels of mean.

There is one really clever aspect to this story that I love. The whole idea of LATCH is that you are using concentration and hope to make magic happen, rather than spells and magical blood legacies. Once you learn to have faith in your capabilities, then you can transform into different people, light candles with your mind, communicate with animals, and other wonders. Of course, this is one big metaphor for every teenager finding magic in themselves, but the adventure Wendy goes on to find her self-confidence is clever and fun to watch.

Like I said, this book is more of a fantasy tour through New York City than a truly enthralling hero’s journey. Like The Faerie Path, I come back to this book for a fun romp through a beautiful or amazing place, than to be with unique characters. And, especially for a teenager who wants to believe they can find magic in their own hearts, it’s a serviceable little book. It leaves room open for a sequel—a sequel that, to my knowledge, has yet to be written—but, like I said, serviceable.

Leave a Reply to The Library Key Cancel reply