These days, I’ve been hesitant to dedicate myself to a series. Because I consume so many new stories, I don’t always have time for them, especially series that start out small, but stretch themselves to their breaking point. But I’m more confident in my endeavors when a series is either already finished, or I know exactly how many books there will be. Yet again I bring you a book suggestion from my friend Megan, this time with a glowing recommendation. And I cannot bring myself to disagree with her. 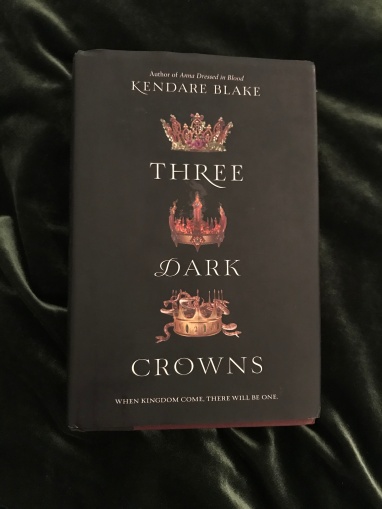 On the mythic island of Fennbirn, three triplet sisters, each queens of a special branch of magi-workers, are born each generation. These three queens, once they come of age at sixteen, must compete to win the island throne in a bloody battle royale. It’s a battle between three powers: the elementals, who can summon wind and fire and storms on a whim; the naturalists, who command plant and animal life; and the poisoners, who can ingest the deadliest plants and live to tell the tale. These three sisters, Mirabella the elemental, Arsinoe the naturalist, and Katharine the poisoner, must win the crown for themselves and their kind, but sometimes, accidents can happen…

Building a fantasy world should happen slowly and carefully, and author Kendare Blake does this pretty well. You never get a huge info dump about the people, the history, the religion, etc., because the story is contained within this one world. Each type of magic-worker is differentiated by small details, like clothing style, food, and even their attitudes about the other peoples.

But what’s most interesting is the perspectives everyone has about each queen. For instance, because Mirabella is an elemental, she is rumored to be strong and violent, when in reality, she is the softest and sweetest of the three, retaining her childhood affection for her ill-fated sisters. Arsinoe is thought to be the strongest of all naturalists, just by virtue of being a queen, when she has little to no power at all. Only Katharine is the one who fits her poisoner reputation, by being small and skeletal, but still calculating and cold. You can’t really pick a favorite queen after this one book, but they feel like individuals who know what they have to do to survive, even if they might not want to do it.

The story is told in an omniscient voice, where scenes focus on the people surrounding the three queens, mainly their friends, and the priestesses overseeing the progression of the sisters’ battle. This dramatic tension cues us into what’s happening behind the scenes of this whole event, and it builds even more sympathy for the three girls and what cruelties they might have to commit to survive.

Since this is the first book in a trilogy, there is less action and more setup of the characters’ relationships. Friendships are established so that perhaps they’ll become betrayals later. Loves are brought to life so they might turn to heartbreaks. And in a story like this, you really don’t know whom you can trust, so it’s hard to let your guard down. Still, it looks like we have a setup for a killer battle in the next book, no pun intended.