John Green is a name that sends literary circles into either scoffs of indifference or screams of fangirlish delight. When I moved to Indianapolis to go to Butler University’s MFA program, my older sister Robin ecstatically asked to see the city with me, so as to point out all the places mentioned in The Fault in Our Stars. For me, I fall somewhere in the middle. I acknowledge Mr. Green’s talent for creating compelling characters and posing interesting questions to his readers, but…okay, how about we talk about Looking for Alaska first? 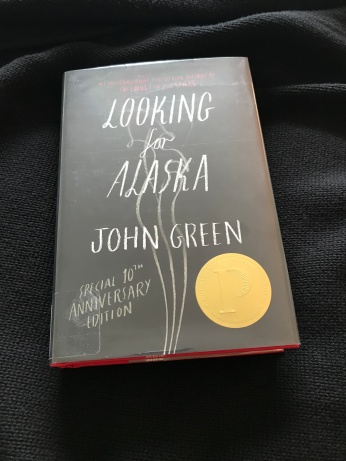 Miles Halter, a shy teenager intrigued by famous last words, goes to spend his junior year at Culver Creek, a boarding school in Alabama. There, he makes an eclectic group of friends, including Alaska Young, a reckless and impulsive girl who also collects books. Told over the course of a single academic school year, Miles, Alaska, and their friends embark on one coming-of-age adventure after another, some spectacular and life-changing, others tragic and devastating.

Looking for Alaska, like Will Grayson, Will Grayson, was a Top 16 Reading List book at my high school that, for some reason, I never read. But now that the TV series has premiered, I have literary friends who were determined to fix my heathen mistake, so here we are.

On the one hand, I do like it when books leave me with questions, which, in this case is: how do we get out of the labyrinth? Alaska provides these last words of Columbian writer Gabriel Garcia Marquez (whose work I can only describe as the Fantasia of literary fiction, if that’s any indication), and they mold a theme for the whole book. Corny as it sounds, it’s a fun question to pose to your friends over a few cold ones, and even now, I find myself pondering it.

However, the rest of the book left me in a bit of a muddle.

Like I said, John Green writes teenagers who are unmistakably teenagers. They play around, they make up stupid games, they tell crazy stories, but most of all, they feel very deeply. When they’re happy, they’re ecstatic, and when they’re sad, they’re devastated. It’s a relatable cast of characters.

And yet, I’m still turning my brain over and over about how I feel regarding Alaska.

For one thing, she is brash and selfish and kind of annoying. I do feel sympathetic toward her after knowing what happened in her childhood, but she’s not the sort of person I would seek out for friendship. I judge characters based on two factors: whether I think I could have a regular conversation with them, or if there is something driving them forward. I don’t think I’d feel comfortable talking to Alaska, and I sort of know what drives her (her mom’s death might have contributed to her recklessness), but based on how she reacts and treats people in given situations, Miles’ attraction to her doesn’t make a lot of sense.

I think Alaska follows the trope of manic pixie dream girl. She comes crashing into Miles’ life with unpredictability and spontaneity, and as a result of her turning his life upside down, Miles falls in love with her. Of course, Miles does acknowledge that she is moody and mean, but I don’t really see the depth of his interest in her. Alaska only seems to have friends because she supplies them with cigarettes and booze—and because she plays the occasional master prank.

I will give the book this: the atmosphere is distinctly bleak. The slow hours of a high school day, coupled with the heavy questions the characters face, give the book almost a black-and-white tone. Maybe it’s because the characters smoke so much that the smoke itself pervades the story, which is kind of neat. After all, the cover of the book is a smoking candle against a black background.

I came to this book so I could finally join the conversation. It’s not a life-changing book by any means, but it leaves its readers with an honest inquiry.