You would think that, having frequented the fantasy section numerous times, I would have tried some of Holly Black’s work. She has won many accolades for her faerie stories, full of dangerous revels, forbidden forests, but most of all, of tantalizing faeries with beautiful faces and terrible magic. The Darkest Part of the Forest is not my first time reading about humans meddling in faerie affairs, but it’s quite an interesting romp back through ye olde forests. 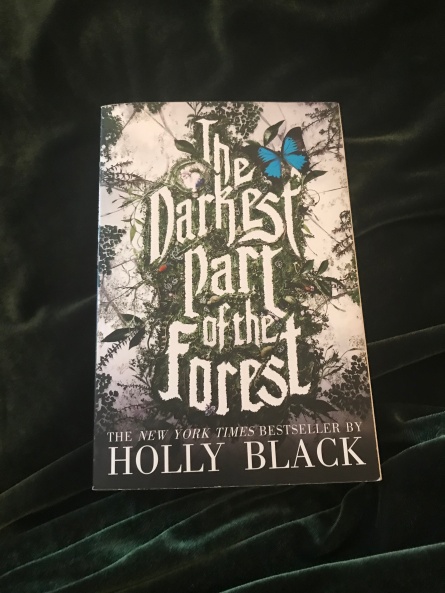 Teenage siblings Hazel and Ben Evans live in Fairfold, a small contemporary town that has held a tentative truce with the magical Folk in the nearby forest. In that forest, a glass coffin has sat for years, containing a strange but beautiful faerie boy with horns in his head. Hazel and Ben have made up stories about this boy all their lives, full of adventure and danger and much romance. But strange things begin happening when one day, the coffin is mysteriously smashed, and the boy has vanished…

When it comes to YA faerie books, I usually know what I’m getting into, and it usually turns out just as I suspected it would. But I like stories where the contemporary and faerie worlds live side by side, like an M. Night Shyamalan Village kind of setup. There is definitely more mystery than horror here, which is just how I like my faeries.

I also like the story in this book. Rather than having two teenagers sucking face for most of the book, it builds on the lore and mystery surrounding the Folk, and how it bleeds into Fairfold. It’s more of an introspective journey for Hazel, the protagonist, rather than a cliché human-faerie romance. When Hazel was little, she made a bargain with the Folk that affects her much differently than she expected, and the twist of what her bargain actually means is cleverly done. She is beaten down and tricked and altogether tested for much of her journey, and you wish the poor thing would catch a break.

Hazel is a pretty good protagonist, and so is her brother Ben. The adorable thing about Ben is that he shares in Hazel’s romantic adventures with the boy in the coffin. But Ben’s gayness never feels forced, nor is it his sole characteristic. When confronted with the faerie boy, Ben is shy, but also wary of him. Ben is nowhere near the spitfire that Hazel is, but he is still a protective and capable older brother to her. The book flashes back a few times to their childhood adventures—something I wish we had seen more of, honestly—and they work well together when hunting faeries and becoming knights. But, I mean, I can’t help that I love reading about young siblings having adventures together.

While this story is very much about Hazel and Ben, it does give way to some romance. Like I said, it luckily doesn’t take over the story, but I do wonder if maybe the story could have done without it. I didn’t feel much chemistry between the love interests, and it holds so little relevance to the characters’ growth, and the overall story, that it feels like a tag-on.

I can see why most fantasy readers love Holly Black. She revels in the darkness, but also the beauty, mystery, and intrigue of faerie lore. I kind of wish there were stories with kinder, gentler faeries, but I can’t complain when a story is creative and lets you taste the bittersweet fruit of faerie lore. I think I’ll go see what else she’s got out there.