When I first read Beth Fantaskey’s Jekel Loves Hyde, I had not read the Robert Louis Stevenson classic that inspired it. Although I was not in love with this book the first time I read it, something about Jekel Loves Hyde drew me to read it again when I found a discounted bookstore copy—and now a third time, having finally read the original Jekyll and Hyde story. Was it the pseudo-Gothic mystery involving descendants of Jekyll and Hyde themselves? Or maybe it was seeing how much Fantaskey actually honored the original story. Either way, I’m not so sure my feelings have changed. 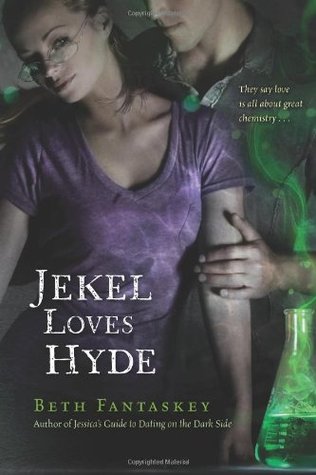 Jill Jekel has always been the good girl: always listening to her mom and not partaking in any high school vices. But then, her chemist father is murdered, and her college savings mysteriously vanish. The only way to get that money back lies in a lucrative chemistry scholarship. To better her chances, Jill teams up with another chemistry student, Tristen Hyde, and they decide to recreate the famous Jekyll-Hyde experiment. Except, Tristen is only partaking on the chance that the formula they create may silence the violent thoughts lurking within him—the voice of Edward Hyde himself.

When I think of Jekyll and Hyde, I think “horror” and “melodrama,” which, not surprisingly, are the words to describe this book. Horrific things happen, but melodramatic things more so. Maybe that was the intent since this book borrows so much from the Jekyll-Hyde story, but it comes off as kind of cheesy here. Not that it spoils anything, but when Jill and Tristen declare their love for one another, you kind of roll your eyes at the circumstances surrounding it.

I didn’t think too much about this the first time, but it kind of opens more questions for me. Jill and Tristen base their experiments on two things: the Jekyll and Hyde novel by Stevenson, as well as the original documents from Dr. Henry Jekyll himself—which Jill’s father had all along. So, not only did Jekyll and Hyde really exist in this world, but Robert Louis Stevenson also wrote a story that follows the real events exactly. That either means Mr. Stevenson had an incredibly accurate imagination, or he actually spoke with enough people to get the real story down pat.

No one brings up this point in the book, and it bothers me a little. I think it would have worked better if the Stevenson novel did not exist in this world, and the Jekyll-Hyde story was touted as fiction, despite the documents detailing the experiments being real.

Plus, there’s the, um, questionable connection between Jill and Tristen.

Here, Jill and Tristen come from two different families, on the assumption that Jekyll and Hyde were literally two different people—in body and in soul. But if you think about it in the context of the original novel, Jill and Tristen would still be coming from the same bloodline. Hyde was just a persona that Jekyll adopted in order to indulge in immoral or corrupt acts (well, immoral or corrupt by Victorian standards, but still). Hyde and Jekyll share the same body, and therefore the same blood and DNA. So, technically, Jill and Tristen would be blood relatives. That kind of makes their romance a little…erm, weird, to me.

It seems, in that regard, like Fantaskey disregarded parts of the Jekyll-Hyde story, but also honored others. For instance, Jill and Tristen run into the same problem that Dr. Jekyll did: they create the formula, but they must find the tainted salt that made Jekyll’s formula work. It comes as a huge revelation to them, same as it does to Jekyll.

Who knows? I might be nitpicking only because the original novel was so compelling, and Jekel Loves Hyde abides by the idea that Jekyll and Hyde are literally two different people—just like any other iteration.

Seriously? Why must we continue to do this to every Gothic horror novel, when the original novels are just as compelling—if not MORE so—than the iterations that authors and filmmakers pump out?

I’m sorry. The English major in me has feelings.

Now, anyway, is there something I actually kind of like about this book?

The same way that Tristen battles the voice of Hyde, Jill’s mother suffers from a mental breakdown after her husband’s murder. Jill has to step up and take care of the house while her mom recovers from her mental illness. Similarly, Jill has to face the things that scare her after the murder, but, unfortunately, her arc is not that interesting.

In a Jekyll-Hyde story, if you’re going to differentiate between who’s supposed to be good and evil, then you obviously have to take it to extremes: make the good person a scared, meek doormat, and make the evil person as devious and unfeeling as a cartoon villain. These extremes are slightly less cliché in this book, but, yeah, Jill is kind of a boring character. It is possible to make a shy character interesting, but she feels kind of spineless in some situations.

And I think that—aside from the idea that Jill and Tristen might actually share a bloodline—is the main hang-up I have with their relationship.

Tristen calls a lot of the shots in their partnership during the experiment, and Jill admits that she finds it hard to refuse Tristen. He does enough violent stuff that Jill feels unsure about being around him. And yet, she always goes back to him. Their relationship fluctuates enough where I was wondering why Jill didn’t just walk away.

I’m also just not a fan of the good-girl-falls-for-bad-boy story. It never makes any sense, and no matter how tortured or sensitive the boy is, it doesn’t make up for all the crazy stuff he does because he “just can’t help it.”

In fact, I almost wish the genders had been reversed in this story. What if the Jekyll character was a good boy, and the Hyde character a bad girl?

There are some decent ideas in this book, but it’s just not my kind of story. It doesn’t do anything much different from other iterations of the Jekyll-Hyde story, and having a meek virgin girl falling for the tortured bad boy just doesn’t, well, turn me on.