Today’s book serves two purposes: one, I’m still kind of coming down from the emotional high of Finding Dorothy, and second, I’ve seen this book many random times at bookstores and libraries. So I guess today is the day where I finally sit down and read it. Not that it’s been hyped up or anything; I did not expect anything but a light, escapist young adult read. So let’s find out what all the “drama” is about, shall we? 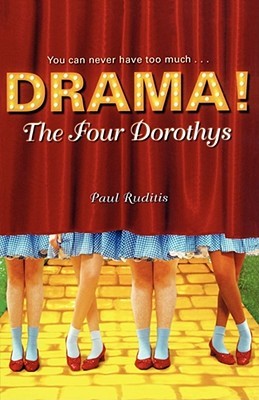 Each spring at Orion Academy, a musical spectacular is put on to showcase its students’ theatrical talents, this year’s being The Wizard of Oz. But Orion is an elite Malibu school, where every single student needs a moment in the spotlight, so there isn’t just one Dorothy—there are four! With so many students fighting for the spotlight, it’s no small surprise when things start to go wrong. A series of strange but vicious pranks start making the Dorothys drop from the show. Now that the game’s afoot, it’s time to put things to rights before the show opens…

I have a mixed reaction to this book. On the one hand, the entitled drama of casting four different Dorothys within the same show is kind of funny. The mystery is kind of engaging, even though you have a feeling they’ll pull a red herring and a third-act misunderstanding is on the horizon.

Notice that phrase: kind of. That’s pretty much where this book falls into. The characters are kind of interesting, the story kind of intriguing.

The narrator (not main character, as he insists emphatically) is Bryan Stark, the best friend to one of the Dorothys, Sam. He watches everything play out with a snarky voice full of many asides and wandering tangents, which is not necessarily bad. It’s a purely teenage voice, but it derails the narrative from time to time.

The trouble with Bryan is that he insists he is a side character, even though he plays a huge part in the story. He is also kind of a douchebag in that he thinks he is above his classmates’ tastes in dating and food, and makes it known at every turn. In the end, I guess he is kind of a likable character, but it took me way longer than it should have to like him.

There is also this barely-side plot about Bryan lamenting his not having come out of the closet yet. If this was the author’s attempt at giving this “side” character a little more substance, it was only featured in the book a handful of times, and barely holds any water.

There isn’t really a twist villain in this mystery, which I can appreciate a little. I mean, at least it didn’t pull a red herring like I expected it to.

The climax is kind of rushed too, with a last-minute attempt to include a misunderstanding between Bryan and Sam. The ending on its own is kind of charming, but not really enough to be a saving grace.

I’m not entirely sure I can even recommend this book. It doesn’t have enough good stuff in it, nor enough bad stuff for me to warn you away from it. In the end, it’s your call, but this is not a mystery for the books.