For whatever reason besides fluff and escapism would I pick up a romance novel? With nothing better to do but sit and read these days, it makes sense to read something that will remove me from all the anxiety and uncertainty. And what is more escapist than a title that has the word “princess” in it? 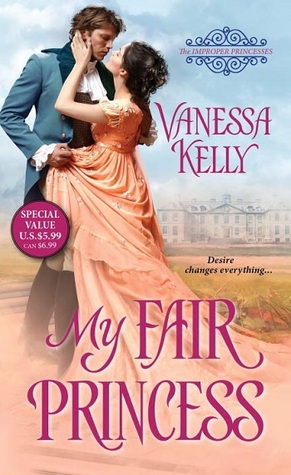 Gillian Dryden might be the bastard child of a disgraced prince, but she acts like anything but. She is a spunky, strong-willed girl who spends her free time hunting down smugglers on the outskirts of her family’s Sicilian estate. At her grandmother’s insistence, she is brought to England to be re-educated as a lady—not an easy task. But that’s why her grandmother has employed Charles Leverton, a duke and family friend who has what it takes to tame Gillian. Though it looks like more than just Charles will do a little taming here…

Unlike Strawberry Hill, there was much more plot this time around. I’m not saying there is really anything of substance here: just that I remember much more of the story, because it’s not that heavy on the exposition. How ironic—a romance novel can take place in the twenty-first century but focus a lot on the past, while this one takes place in 1816 and focuses on the present. That was rather surprising.

The usual romance genre stock characters are here. Charles is the powerful duke with more money and land than he knows what to do with, while Gillian is the free spirit that cannot be tamed. The stuck-up stuffed-shirt elders, like Gillian’s grandmother, make an appearance too, but they take a backseat to Gillian’s antics. In fact, Gillian’s the best character in the book. She might fall into the cliché woman-ahead-of-her-time category, but I can’t discredit the scene where her carriage is beset by thieves, and she pulls a freaking gun on them. You go, girl!

Although I enjoy romance novels, there’s a problem when the main characters go back and forth about whether or not they even like each other. As per the course, Charles and Gillian hate each other at first sight and show their affection by insulting each other, before gradually warming up to one another. But then, after the inevitable marriage proposal, they change gears about the marriage so much I wondered why they were even together in the first place. Like, are you two going to swallow your pride or what?

Thank God for the smuggling subplot then. Yep: the thieves that Gillian pulled a gun on at one point make a return, and Gillian takes it upon herself to go after them by herself. Like I said, Gillian may be a bit of a cliché, but at least she doesn’t wait around to get stuff, even the dangerous stuff, done.

On the whole, a pretty standard romance novel, with enough steam to make readers blush, but not so little story or character that it’s a snooze-fest—serviceable at best, forgettable at worst.