Skip to content
The Library Key Uncategorized May 28, 2020 2 Minutes

Willa Cather’s My Ántonia was a title I first learned in grad school, when I was learning how to teach. My mentor taught a few works of Willa Cather, and while My Ántonia was not among the discussed classroom titles, it was one he spoke of quite fondly. I never thought of reading it, as I was not entirely taken with Cather’s work, but when I found a copy at the Half Price Books Mega Book Sale, I thought, “Eh, this could be something I pick up when absolutely nothing else is available.” And, so, one rainy day in quarantine, when nothing else provoked my interest, I cracked open the book. 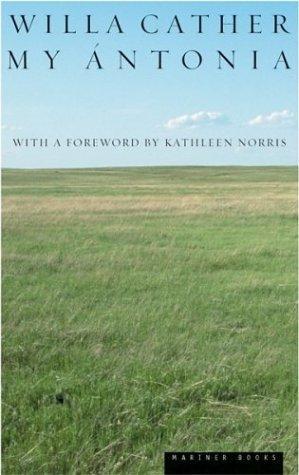 There is no true summary of My Ántonia. It’s a series of vignettes from the childhood of Jim Burden, who goes to live with his grandparents on their Nebraska farm. It’s the mid to late nineteenth century when born Americans and immigrants tried to make a living off the land. During Jim’s first trip into Nebraska, he meets a bold, playful, and energetic Bohemian girl named Ántonia, who becomes his playmate and lifelong friend.

Stories like My Ántonia, which have more of a wandering narrative, can only be pulled off by a master descriptor. Willa Cather is like an early twentieth-century Robin McKinley: she takes huge chunks of time where nothing really happens and makes them sound extraordinary. You might never have been on a nineteenth-century Nebraska farm, but you feel like you could have spent your childhood there.

We don’t spend much time in the present with these characters. We get the information we need from Jim’s lengthy descriptions of the people, the setting, and the hardships of farming. There is dialogue here and there, but because so much time passes in the story, conversations take a back seat.

Normally, I would bemoan a story taking so little time for its characters to just shoot the breeze, but the world they live in is so different from my own that it still works. I liked reading about the town dances, the chores, the farmhands that came and went, the emotional toll of lonesomeness, and monotony. And the characters are described so well in the time we know them that they still feel real.

The characters’ growth is slow, but you can see it most through Ántonia herself. She starts out speaking the broken English of a young immigrant, running wild through the fields, but grows up into a hard-working, loving, efficient young woman. There’s a reason Jim writes so fondly about her: she is spirited and kind, and full of so much love. If there’s one thing any character remembers about Ántonia, it’s how loving she is despite the hardships she endures.

My Ántonia had plenty of opportunities to be a sappy, sentimental ode to the old American farm, but its characters, struggling together through the farming life, made it much more real. Although it starts off a bit slowly, it’s a calm, meditative read that paints a genuine picture of the American farmlands.